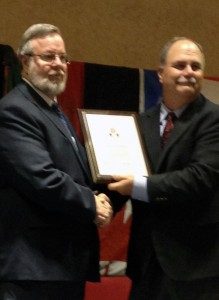 LINCOLN, Neb. – Howard Huffman, president of Huffman Engineering, Inc., was inducted into the inaugural Amateur Athletic Union (AAU) Powerlifting Hall of Fame at its Single-Lift and 3-Lift World Championships on October 12, 2013. Mr. Huffman was awarded this recognition for his commitment to the AAU in Nebraska through developing the organization, competing in meets, and coaching. This also earned him the Brother Bennett Award in 2008. Huffman Engineering is a company sponsor of the Nebraska AAU.

Hall of Fame members are men and women who have lifted in multiple divisions, traveled to several National and World meets, participated actively in the organization’s events for at least five years, and influenced the sport of powerlifting.

Mr. Huffman first lifted in the AAU during college and returned to it in the mid-1990’s. He went on to revive the AAU in Nebraska in 2004. With the support of the national AAU organization, the Nebraska Sports Council (Dave Mlnarik and Scott Ash) and the Cornhusker State Games organization, Nebraska has become one of the top five states for number of AAU powerlifting members. It also has the reputation for the best-run meets in the area. The Nebraska AAU encouraged raw lifting while others were pushing equipped lifting, and it worked with the Special Olympics of Nebraska to provide training, coaching, and assistance for athletes with unique challenges. Mr. Huffman competed in the 2009 World Bench/Push Pull meet.

The AAU is one of the largest, non-profit, volunteer sports organizations in the U.S. As a multi-sport organization, it is dedicated to the promotion and development of amateur sports and physical fitness programs. For more information about the AAU Powerlifting Hall of Fame, visit http://aaupowerliftinghalloffame.com/.

Huffman Engineering, Inc. is based in Lincoln, Nebraska, and has served the Midwest since 1987, specializing in pharmaceutical, life science, machine, and utility process control applications.