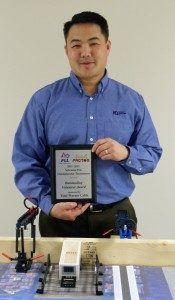 Keith Mandachit, a senior engineer at Huffman Engineering, Inc., received the Outstanding Volunteer Award at the Nebraska FIRST LEGO League (FLL) Championship on Feb. 18. This award honors the dedication of an extraordinary volunteer whose assistance and devotion has helped change the lives of children for the future. Mandachit has been involved with the Nebraska FLL since its inception by serving on the planning committee and as the volunteer coordinator for all of the championship tournaments since 2009. He also assisted at two of this year’s three qualifying tournaments in Lincoln and Kearney, Neb.

In addition, Mandachit helps at the individual level as one of the coaches for HuskerBots, a Nebraska FLL team. Huffman Engineering, Inc. engineers Justin Korver and Evan Kilgore and Novartis engineer, Glen Lampe, also coach the team. The team members are Gavin Korver, Brooke Lampe, Christian Lampe, Ryan Lampe, TJ Mandachit and Sam Philson. In this year’s Nebraska FLL Championship at the Strategic Air & Space Museum near Ashland, Neb., the HuskerBots placed fourth out of 48 teams in the robot game. Teams compete in at least three 2.5-minute matches to achieve their highest score. The 2011-2012 FLL Challenge, Food Factor, asked teams to focus on ways to improve the quality of food by preventing food contamination. Specific missions included removing bacteria, delivering food, and refrigeration.

The HuskerBots qualified for the Nebraska FLL Championship by finishing as one of the top teams in the regional tournament on Dec. 10, 2011 at the University of Nebraska-Lincoln East Campus Union. There, the team received a special award in robot design for strategy and innovation and had the third highest robot performance score in the tournament.

FIRST LEGO League is a global robotics program for 9 to 14-year-olds. The FIRST (For Inspiration and Recognition of Science and Technology) organization motivates young people to pursue opportunities in science, technology and engineering. To learn more about FIRST LEGO League, visit www.FIRSTLEGOLeague.org.