A few weeks ago, another Cybersecurity attack hit and automation control systems integrator Huffman Engineering helped rescue one of their customers. 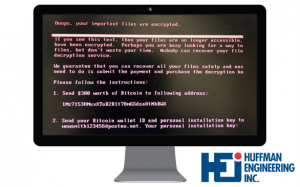 A few weeks ago, the latest cybersecurity ransomware attack, dubbed “NotPetya” or “SortaPetya,” affected many companies across the world including some in the U.S. and one of our customers, a global leader in their industry with many facilities across the world.  As their trusted system integrator partner for one of the facilities, Huffman Engineering was called upon to help them recover from this mess.  Upon arriving at the scene, we found that every Windows-based computer, virtual or local, was encrypted.  Domain controllers, human machine interface (HMI) servers and clients, historians and engineering workstations…all rendered useless.

Where to start?  Paying the ransom and allowing the hackers to decrypt the compromised systems was not an option.  The only choice was to rebuild each system either from scratch, or hopefully with a backup.  We were about to find out how good –  or not good –  the customer’s backup plan was.  Most of the HMI interfaces on the shop floor were easily recovered using a whole hard drive image.  Some of the virtual servers were recovered with a backup.  Not all of the backups were current; one was found to be two years old.  Before systems were placed back on the shop floor network (SFN), each system was updated with the latest Windows patches and antivirus updates.  Within two days, the Huffman Engineering team had the critical systems back up and running.  Within a week, even with the 4th of July holiday in the middle, the automation control systems were recovered and functioning.  Other facilities within the company had not yet come even close to recovering and resuming production.  One of the keys to the automation systems’ quick recovery was the strong relationship built between Huffman Engineering and our relatively new customer.   This partnership allowed Huffman Engineering to gain knowledge of the customer’s industrial control systems and use it in their time of need.  The Huffman Engineering team understood the many control system applications that were in place and how they were being used which made the learning curve a lot smaller.

Now what?  What was learned during this crisis?  Huffman Engineering recommends the following security precautions to help prevent not just cybersecurity attacks, but to mitigate a variety of potential negative security events to your mission-critical systems.

Cyberattacks on industrial control systems are a nightmare, no question.  Imagine going through the recovery process on your own; it’s probably your worst nightmare.  In this particular case, the expertise of CSIA-certified Huffman Engineering and the trusted partnership with their customer led to a quick and successful recovery of their mission-critical industrial control systems…and a better night’s sleep for all.