Huffman Engineering is the single-sourced subcontractor responsible for designing and installing the instrumentation and controls on a section of a major, 22-year, 74-part wastewater improvement project for the City of Omaha.  Having just finished the first two phases of the project, here’s how it’s going so far. 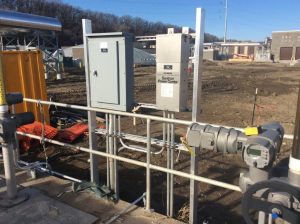 The City of Omaha is among 772 cities across the country that have a combined sewer system rather than separate sanitary and stormwater sewers. A combined sewer system collects rainwater, domestic sewage and industrial wastewater into one pipe. When the volume exceeds capacity during heavy rainfall events or snowmelt, pressure on the system is relieved by directing the overflow into local waterways to minimize backups into homes and businesses. This is known as a combined sewer overflow (CSO). When this occurs in Omaha, untreated stormwater and wastewater, including raw sewage, from the City’s 850 miles of combined sewer begin to overflow into the Papillion Creek (11 outfall points) or Missouri River (19 outfall points).

Omaha’s $2 billion Clean Solutions for Omaha (CSO) Program is a Long-Term Control Plan (LTCP) for a massive sewer overhaul to bring the City into compliance with the requirements of the U.S. Environmental Protection Agency CSO Control Policy of 1994 (EPA CSO Control Policy) and Clean Water Act. There are a total of 74 projects encapsulated in this program to reduce the amount of CSOs into the Missouri River and the Papillion Creek. The CSO Program’s schedule started in 2007 and is slated to end in 2029 resulting in 16 remaining CSO outfall points: greatly reducing frequency, volume, and duration of CSO events. The City’s investment in its CSO Program has and will continue to improve water quality in Omaha’s local rivers and streams achieving multiple benefits for the community.

The CSO plan included improvements to the Missouri River Wastewater Treatment Plant (MRWWTP) built in 1964 treating an average of 25 million gallons per day (MGD) of wastewater. The improvement plan to increase the treatment capacity for wet weather included three phases – Schedule A, B1 and B2.

As a longtime trusted resource to the City of Omaha, Huffman Engineering was single-sourced by the city as a subcontractor to Hawkins Construction Company and was responsible for designing and installing the instrumentation and controls for automation improvements and additions to the water treatment facility. Omaha relied on Huffman Engineering’s expertise to optimize automation of the existing and new controls and systems, interfacing multiple vendors’ equipment to communicate together. Schedule A and B1 of the MRWWTP CSO improvements are completed.  Schedule B1 began in 2017 and will continue through 2019.

The first phase included separate primary treatment of the high-strength wastewater from meatpacking industries in the South Omaha Industrial Area (SOIA), and modifications to the plant’s primary effluent lift station so that the high-strength wastewater can go directly to the secondary treatment system. The second phase increased capacity to a peak-hour flow of 150 MGD during wet weather with up to 64 MGD of flow being sent to secondary treatment.  Improvements included a new headworks facility, modifications to preliminary and primary treatment facilities, additional odor controls for the primary clarifiers and a chemical building, and a chlorine contact basin to disinfect primary effluent flows exceeding the 64 MGD capacity of the plant’s secondary treatment system. Construction for the third phase is in progress and will disinfect flow in excess of the secondary treatment capacity.

The sheer size of a project like this requires an enormous amount of planning, coordination and constant communication. Large projects always have challenges, but with the completion of the first two phases under our belts, we are happy to report that we successfully adapted to project changes and met the City of Omaha’s goals on time and within budget. What were the keys to success? Here we will share a few tips that helped us successfully complete the project and set the stage for MRWWTP continued success with the improvements.

With the interdependency of so many groups working on the project, many things can affect the results. It’s very hard to model all that’s going on when you’re only doing pieces of each system. To address this, for each phase of the project we kicked off with “Open Project Meetings” to have all parties on the same page to achieve the project goals. Huffman Engineering also had regularly scheduled coordination meetings with stakeholders from the City, the City’s Program Manager CH2M, and Hawkins Construction Company to make sure all parties were ready for the next steps. In addition, internally we had regularly scheduled team meetings on Fridays.

“The level of interaction with the client and other parties involved is far more than most industrial projects I’ve been a part of.  It really has to be, because it is such a large project with so many integral components,” said Jim Fricke, Senior Engineer and Project Manager for our CSO team.  “Credit should be given to several members of the team, especially to Hawkins Construction and the City of Omaha. The high level of communication has ensured that everyone was on the same page and there were very few surprises.”

Since this was a City of Omaha job, uniform standards were of paramount importance.  In conjunction with the City’s team, Huffman Engineering developed standards for Programmable Logic Controllers (PLCs), Human Machine Interfaces (HMIs) and Supervisory Control and Data Acquisition (SCADA) systems.  This included tag structure, program structure, and standardized function blocks.  All of the HMI screens and pop-ups are programmed to look the same anywhere in the system.  Maintaining consistency across all City projects will help with implementing future projects, as well as help the City’s staff to troubleshoot and make small changes when needed.

“For example, we built function block standards. We developed a system of a minimal number of blocks that are purposefully built to serve the function of every type of equipment desired.  This promotes usability and trainability in programming and troubleshooting,” said Alex Winking, Mechanical Engineer at Huffman Engineering.

While standards are in place, we also engage in continuous improvement of the standards to optimize usability and performance. Of particular note, to enhance the value of the function blocks, we implemented a simulation option which is not readily available normally. This allows for simulation of changes in inputs and output at the facility to show the City how it’s going to operate before actually implementing it.

The Factory Demonstration Test (FDT) is utilized to simulate and demonstrate the design and functionality of the new automation system. Everybody can see exactly what the SCADA screens look like and the operation behind the scenes of how things are going to operate. This helps tremendously to work out any issues before onsite installation. Everything must be signed off by all stakeholders to move forward with installation.

This benefits the City by having a complete history of the system. For future decision making, they have a huge amount of resources to pull from.

A strong start to the project sets the team up for a success.  Something of this scale has proven that our meticulous methods work for any project: small, large, or enormous. We are happy to see the benefits that the City of Omaha is currently reaping and look forward to contributing to an even cleaner Nebraska in the years to come.