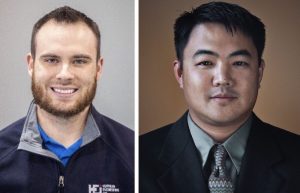 Lincoln, NE – January 7, 2019 – Huffman Engineering, Inc., a leader in control systems integration with offices in Nebraska and Colorado, today announced that two more of their engineers, Keith Mandachit and Jay Steinman, are licensed as professional engineers in the State of Nebraska. This brings the company up to eight licensed professional engineers on staff.

Jay Steinman’s experience with mechanical design, PLC and HMI programming, qualification and validation have led to his success as a lead project engineer. Jay also holds certification as a Wonderware Certified Developer. Jay completed his undergraduate education at the University of Nebraska and received his Master of Engineering Management degree also from the University of Nebraska in 2017.

Keith Mandachit has worked on numerous projects for customers ranging from water treatment to pharmaceuticals. His familiarity with many different applications and industries makes him an asset for any customer considering technical upgrades or new applications. Keith was named to Control Engineering Magazine’s “Leaders Under 40, Class of 2012,” received the Control System Integrators Association’s (CSIA) Rising Star Award in April 2014 and received Nebraska FIRST LEGO League’s Outstanding Volunteer award in 2012. Keith is also an Eagle Scout with the Boy Scouts of America. Keith has a Bachelor of Science in Electrical Engineering, from the Missouri University of Science and Technology and serves as Huffman Engineering’s Engineering Manager.