Historic Spring flooding in the Midwest brought damage to more than personal property. Infrastructure was damaged and services interrupted. 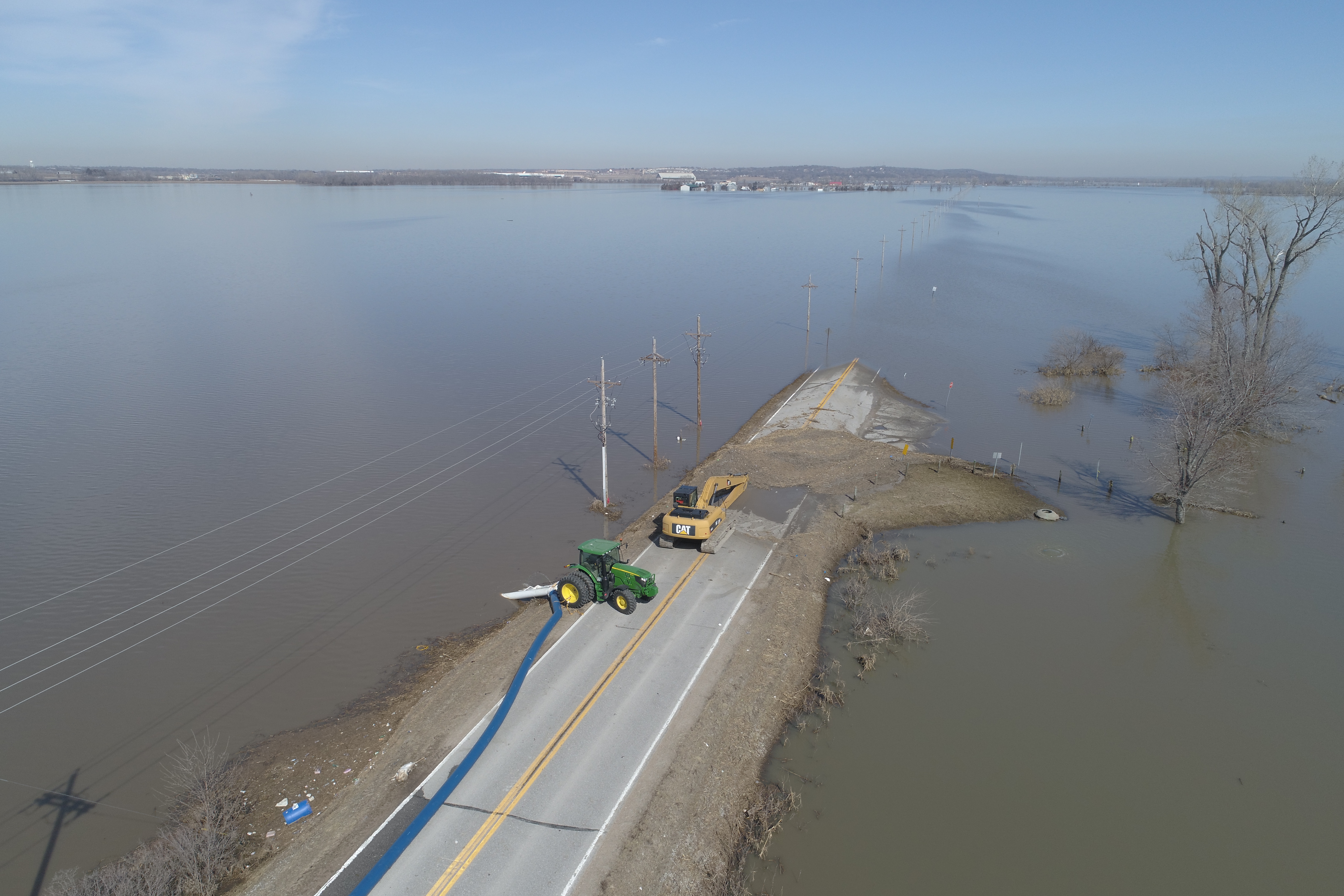 Flooding at the Papillion Creek Water Resource Recovery Facility (Papio WRRF), located in Sarpy County South of Omaha required the plant to be evacuated. This resulted in approximately 65 million gallons of raw, untreated sewage to flow into the Missouri River untreated each day from March 15th through mid-April. While clean-up efforts continued around the state, Omaha Mayor, Jean Stothert, emphasized the need to bring the Papio WRRF plant up and running and do it quickly.

Huffman Engineering, Inc. was part of the team called in, first to assess damage, and then to help restore processes to the plant. Parts of the facility had been submerged under more than 8 feet of floodwater damaging pumps, motors, and critical electrical control components. Plant personnel were able to access the plant beginning March 26th, and they saw the damage was extensive. Current estimates to restore the plant to pre-flood conditions are at 35 million dollars.

“To do the work well we were required to be both flexible and calm while maintaining the sense of urgency of the situation,” said Jim Fricke, P.E., who leads the Huffman Engineering effort. “Because this was and is a recovery effort, things change daily. We have to listen well before reacting and provide input that is proactive and forward-thinking so others could make good decisions.”

When levees near the plant were topped on March 15th and plant personnel were evacuated, it was unclear how much of the facility would need to be restored. Restoring power to the systems was a critical first step. Being able to bring the different control components back online was more complicated and required controls expertise. Processes controlled by PLCs, and signals to and from equipment have to be systematically brought back online. Flow, level and pressure instruments function together to operate the plant effectively.

Restoring power to the plant was staged in several steps. The electrical contractor first used portable generators to bring power to vital processes. In subsequent steps, OPPD (Omaha Public Power District) had brought power to the plant and as electrical gear was repaired or replaced, power could be restored. As equipment begins to operate, Huffman Engineering’s ongoing role is to help assess and restore the controls for the equipment. Flood damaged equipment that is powered up could potentially result in damage to that equipment, the controls and the instrumentation on the system. 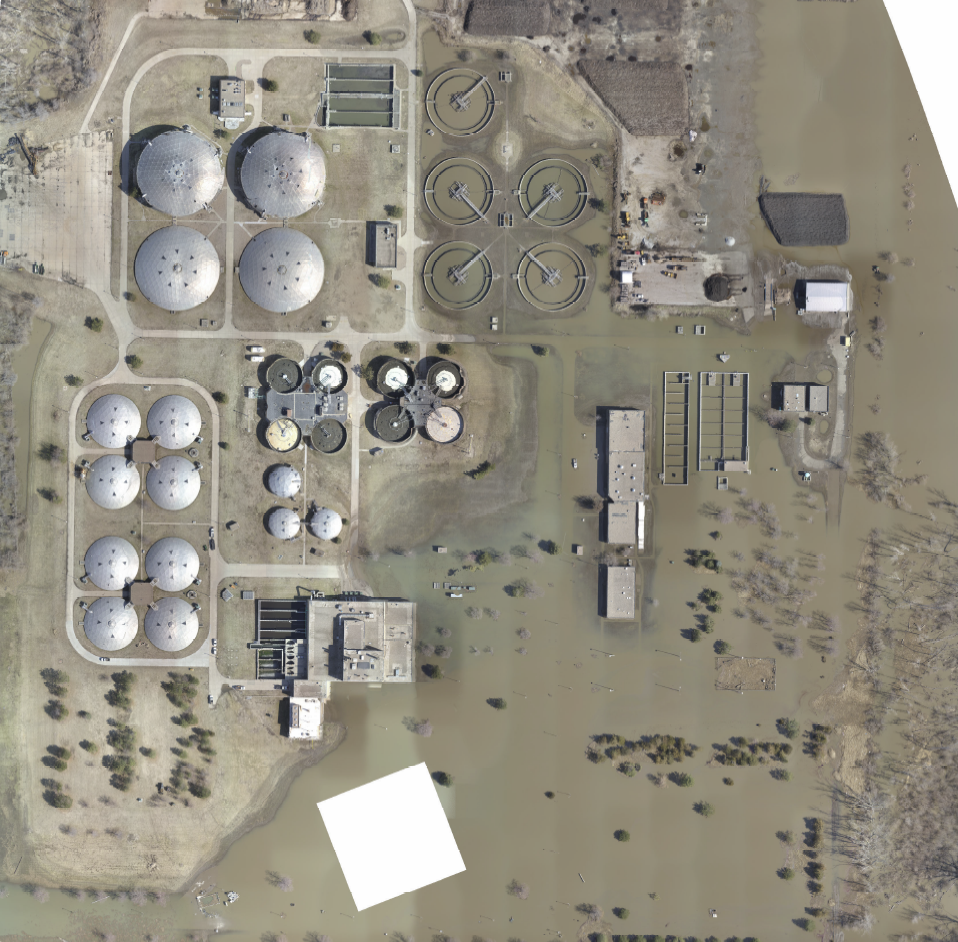 Contacted by the City of Omaha and the general contractor, Huffman Engineering, Inc. pulled personnel off other projects and redirected effort toward restoring plant function. Unlike project work, where a detailed direction is usually developed before work begins, this work changes and grows as damage is uncovered.

“It was not the optimal time to pull people off of other work,” explained Fricke, “but we were committed to getting the plant operational and have had several people onsite almost every day. We understood the need to move quickly and purposefully.”

The scope of work, according to Fricke, was to first analyze the control system and damage to control system components and instrumentation. Huffman Engineering, Inc. familiarity with the Papio WRRF and association with the city of Omaha on several other large CSO (Combined Sewer Overflow) projects, contributed to the trust that had been developed between the city of Omaha and Huffman Engineering. And, in this case, that trust to do a job well was vital to the success of a fast-paced restoration.

It became apparent early on in our identification of critical steps to bring treatment back on line that getting a functional control system back in place was crucial to the overall mission. As soon as we identified the urgency of this need, Huffman was contacted and brought in as a part of the team to get the plant back on line. Their familiarity with the facility and the staff who work at the facility allowed them to step in and help identify the necessary work to get things back up and running,” said Jim Theiler, P.E. and the City of Omaha Public Works – Assistant Director, Environmental Services.

The next step was to align the Huffman Engineering effort with plant priorities. One of the characteristics of Huffman Engineering personnel, according to Fricke, is that as a team we listen well. Listening and considering the ramifications of what needs to happen to get the plant back to pre-flood operation requires both immediate action and a plan to go back and fix those things that are required for a plant to operate at effectively. The first response, however, was intense.

“When I got there, there were already several other companies there. The quantities were incredible. I was told that at one point there were over 250 people onsite that 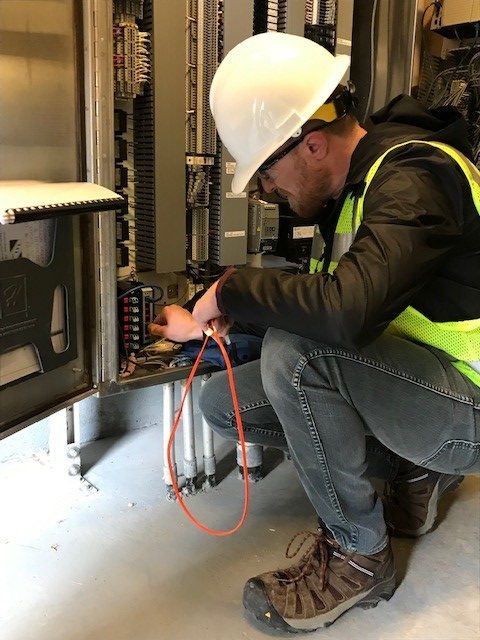 day and I think that is a low estimate,” said Huffman Engineering Mechanical Engineer, Jesse Doyle, who first responded to the call to investigate the damage.

Aligning effort to plant objectives required the Huffman Engineering team to proceed methodically rather than just reacting. The first task was to identify critical components and get them ordered or fixed. While doing this, other components were identified as needing to be replaced or fixed later. For instance, some of the instrumentation, while important to the running and monitoring the process, could wait until vital processes were restored. Huffman Engineering applied the knowledge gained from being involved in many different facets of this plant and familiarity with wastewater system to understanding the processes and equipment. Even with significant familiarity, the project is large and complex.

“I am really impressed with our team,” Howard Huffman, P.E. and president of Huffman Engineering said. “When there is a crucial and fast-paced job to do, it is easy to get pulled into the vortex of reaction. Our team has kept their heads about them and approached the work in a methodical and logical way. Don’t get me wrong,” he said, “They have put in long hours and a tremendous effort, but their effort has been focused and effective.”

“Running a plant in manual requires significant man power and observation,” Fricke noted, “So, the need to move toward restoring the automated control and monitoring continues to be important.”

With a team of control experts, Huffman Engineering, Inc. logged components, developed plans, and worked with plant personnel, other contractors and design engineers. Damaged parts and instrumentation replacement require engineering and plant approval. By identifying the parts of the controls that could be brought up at different times, the effort could be sequenced and integrated with other plant processes. And, once approved, parts were ordered, panels assembled, and plant components began to be functional.

Some of the fiber network has been tested and brought back online. Water damage to the fiber, while not completely destroying the network, made it unreliable. A parallel fiber system is being installed to make the switch over to the new “backbone” with minimal downtime. By mid-April, SCADA system servers were back online and communicating to the PLCs in the trickling filter, grit system, and belt press operation.

Drawings, especially those of other companies, were dried out. Huffman Engineering used those drawings to recreate panels and sub-systems. Drawings from Huffman Engineering, Inc. panels, having been carefully archived by project, did not need to be recreated, but could be reprinted and used quickly. 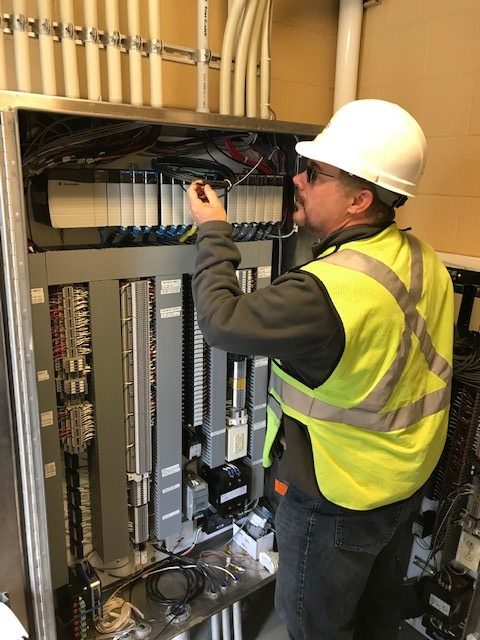 “I did hear from several people onsite,” said Fricke, “that they could identify our documentation because it was thorough.”

Damage to other panels is being fixed in the field by Huffman Engineering technicians who are rewiring and replacing terminal blocks and other panel parts. Double checking wiring connections and testing inputs and outputs will confirm the system can work properly.

“Sometimes we are able to use existing wire,” Fricke commented, “but there are a lot of parts and wiring that have to be replaced. We just have to be very careful to test and verify operations after we replace a part or wire.”

The recovery team, which included Huffman Engineering, watched belts begin to move on April 18th and were pleased that they could work after the flood damage. The belt system allows sewage to be processed and compressed. Once solids are removed, the next step is to send the remaining water to digesters. The digesters follow a series of steps to break down the remaining solid particles and then chlorination can happen.

Chlorination is the last step in treating the water to return it to the river, so cities and municipalities downstream are safe from harmful bacteria. Even before the May 1st deadline announced by the mayor of Omaha, parts of the plant were back online, and chlorination was restored. Fricke estimates that before mid-June this process could again be fully automated.

Some things that are running now may need to be paused for instrumentation to be installed. Those things that were not vital last week, will become vital in the upcoming weeks. And, as Huffman Engineering continues to work on restoring the Papio WRRF plant to full capacity, the methodical approach to all things they are doing will serve to make the plant functional. “It is amazing to see all of us come together,” said Fricke. “We know what we have to do, and we are going to get the job done in the best way we can and as quickly as possible. Everyone is doing what they need to do and that’s the way it should be.”

Although a second wastewater treatment facility for the city was not damaged in this flood and continues to operate, returning the Papio WRRF to full functionality is crucial to handle sewage from the half-a-million people who live in the city of Omaha and protect others who live downstream. The restoration efforts will continue into the summer, and Huffman Engineering personnel will be on site investigating and restoring function to the plant.

“At the end of the day, we care about people, about our eco system and about the future of this area. We do what we do because we can and because we care,” said Howard Huffman. 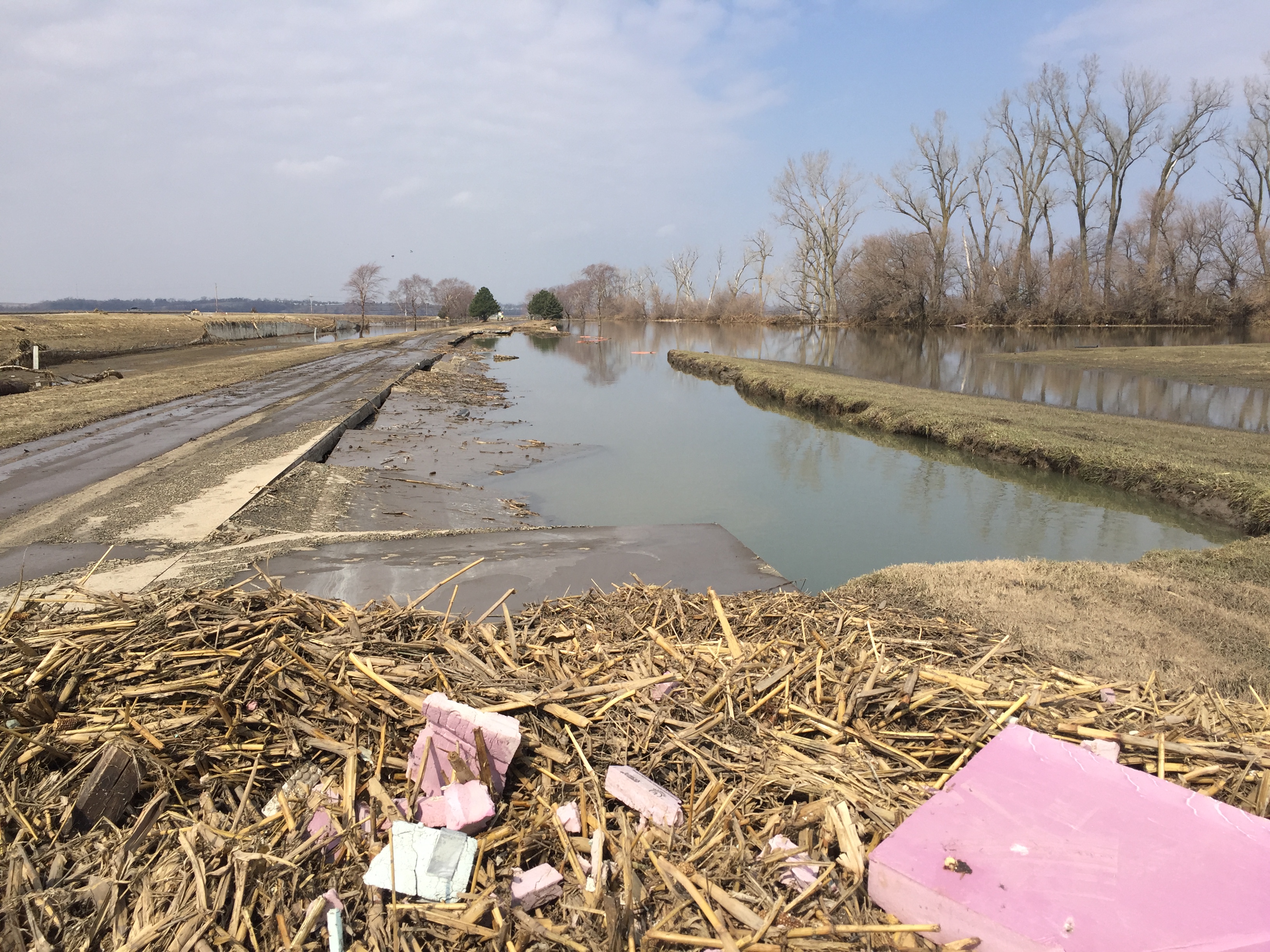 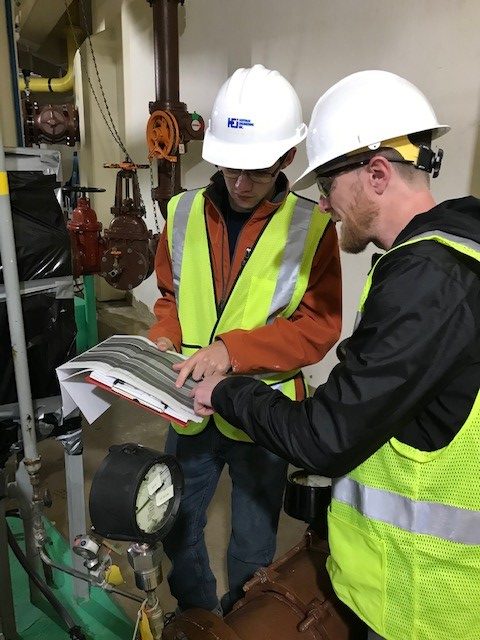 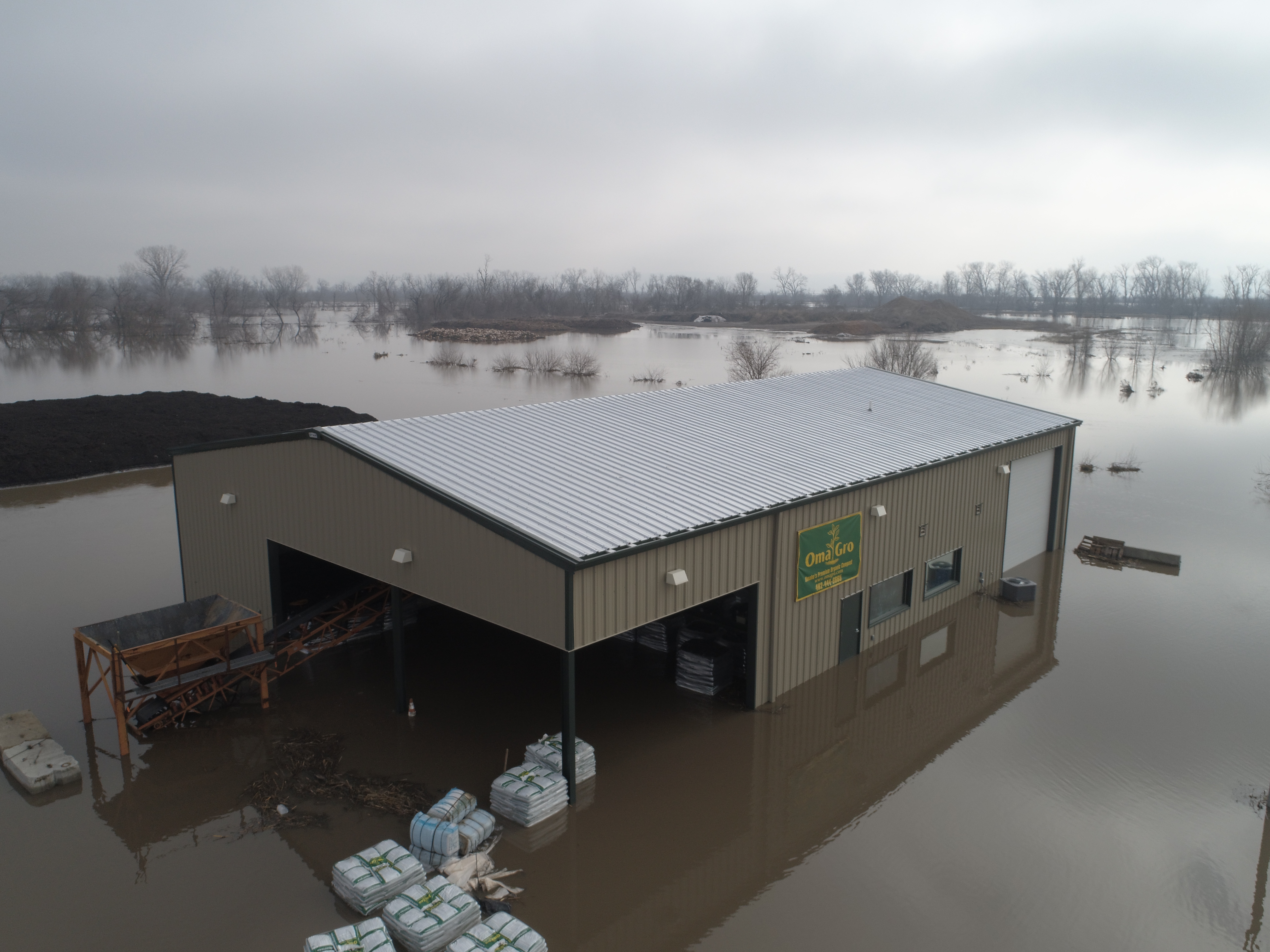